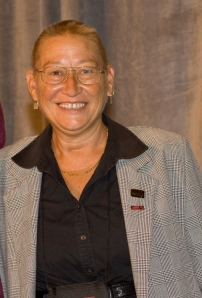 It is with great sadness that we share the news that INANE member Carol “Pat” Patsdaughter, PhD, RN, ACRN, passed away on January 26, 2014.  Pat was a cherished colleague, committed nursing leader, and INANE champion.

Pat’s work as the Associate Editor for the Journal of the Association of Nurses in AIDS Care (JANAC) demonstrated a commitment not only to JANAC, but also to nursing and nursing publication.  She was a respected Professor of Nursing at the Nicole Wertheim College of Nursing and Health Sciences at Florida International University, where she was known for her ability to mentor students.  Pat was an INANE member for more than a decade, and she was always a presence at INANE Conferences, which she thoroughly enjoyed and where she always made friends. Pat will be remembered fondly and missed deeply.

If you would like to honor Pat’s memory, consider a donation to the Suzanne Smith Development Fund in her honor. This fund was established to support the Mentoring Editors Awards, of which the inaugural four will be awarded next month. These awards provide support for four nurses with an emerging interest in the editorial role–as well as those new to an editorial role–to attend INANE with registration deferred. While the awards and the fund are named after our colleague Suzanne Smith who died in 2013, serving as an editor and mentoring others were also core values and a true part of Pat’s spirit. Honor her work with a donation to the development fund and help her memory and legacy live on through INANE.

A memorial is planned in Fort Lauderdale, FL for Saturday, February 1, 2014.

1 thought on “In Memory of Carol A. “Pat” Patsdaughter, PhD, RN, ACRN”